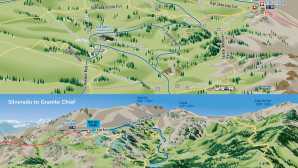 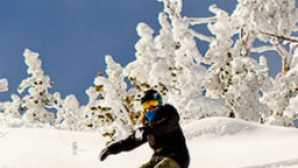 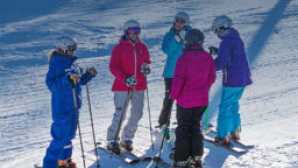 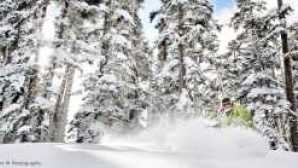 Almost everybody loves snow—but in any given family, different people love snow in different ways. Some ski, some board, some just want to chuck snowballs and go sledding. How can you plan a ski-centric family holiday that makes everyone happy? Check out California snow country, where mountain resorts put a huge focus on pleasing different generations. “The emphasis at California ski resorts is fun for the whole family—even the non-skiers—and they’ve spent millions to make it a reality,” says Michael Reitzell, President of the California Ski Industry Association.

These days, that family member who doesn’t ski can easily spend a full day snowshoeing, cross-country skiing, or tubing. For that in-law who’s not a fan of snow in general (there’s always one), there’s ice-skating, yoga, and even candle making workshops. As for the rest of the clan, who are fired up to hit the slopes, even the runs aim to please everyone: extra wide groomers for Gramps, with nearby terrain parks for rubber-boned kids, and backcountry Snowcap adventures for the family’s adrenaline junkies.

Here’s a look at some of California’s premier resorts, and how they put families first—no matter how many generations you have in tow.

1. Runs for all ages and abilities

California ski resorts make great crowd pleasers, catering to all levels of skiers. “Although we’re known for our legendary black diamond chutes and back bowls,” says Liesl Kenney of Lake Tahoe region’s Squaw Valley, “sixty five percent of Squaw Valley’s skiable terrain is designed for beginner and intermediate skiers.” Other resorts—including Mammoth Mountain east of Yosemite and Bear Mountain in the San Bernardino Range—have terrain parks that run parallel to groomers, so family members with different interests and abilities can still spend the day together.

It’s one thing to keep the slopes in good shape every day—but the best California ski resorts also keep everyone entertained after the lifts close. “You just can’t beat the multigenerational après ski scene at Heavenly,” says Marcie Bradley of Vail Resorts, parent company of Heavenly Resort, on Lake Tahoe’s southeast side. “For adults there’s South Lake’s famous nightlife, plus our Unbuckle at Tamarack après-ski party complete with DJs, dancers, and half-price drink specials.” Kids have it good at Heavenly too, with special programs and events such as Ripperoo Parade, where kids star in their own après-ski parade as they play music, sing songs, and march through Heavenly Village at the bottom of the mountain.

When you’ve got lots of different ages in your family, coordinating meal times and tastes on holiday can be a challenge. One resort that excels at simplifying mealtime for families is Northstar California, long regarded as a leading multigenerational resort. “At Northstar everything is designed with families in mind,” says Cassandra Walker, spokesperson for the resort. That includes family friendly condos (with kitchens) adjacent to The Village, and a centrally located gathering place where parents can relax at fireside lounges while watching their kids ice-skate. “Our most popular family restaurant is Tavern 6330',” adds Cassandra, “where kids flock to the outdoor fire pit to roast s’mores while parents enjoy après-ski appetizers, cocktails, and microbrews.”

4. One giant playground for kids

Not every kid is ready to ski—but pretty much every kid wants to play in the snow, and California’s alpine resorts make it easy to frolic. “There are a ton of great kids’ options at Mammoth,” says Lauren Burke of Mammoth Mountain Ski Area, “such as Woolly’s Saturday Parade, Woolly’s Tube Park, and Woolly’s Merry-Go-Round. It’s the perfect place for families with both skiers and non-skiers.”

6. Snow play for grown-ups, too

Lots of families have at least one adult who would rather not ski or snowboard. That’s why most California resorts also cater to non-skiers in the family, so they don’t have to spend a week just sitting in the lodge. After all, off-the-slopes winter activities can be pretty awesome, too. “I call it JOMO—the Joy Of Missing Out,” says Kevin ‘Coop’ Cooper, spokesperson for Kirkwood Mountain Resort, south of Lake Tahoe. For Coop, it means “the joy of being far away from the ski lifts, in your own element, snowshoeing or cross-country skiing at our Cross Country Center. Once you get out there, you’re in a completely different zone than the rest of your group on the slopes. That’s what makes Kirkwood such a special place.”

“Meet you at the bottom, Mum,” isn’t a phrase you hear often at ski resorts, but in California it’s becoming commonplace. “One of my favorite things about Sierra is the Grandview Express quad,” says Thea Hardy, communications manager at Sierra-at-Tahoe, just south of the lake. “Grandpa, mum, uncle, and daughter can all ride up on the chairlift together, take separate runs that suit their individual skill levels, meet safely at the bottom, and then do it again—all day long.” And that’s the stuff of happy memories for all. 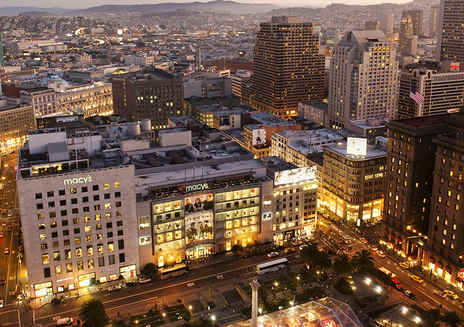 Shopping is an art form in California. Whether you are in search of the perfect cocktail dress or an authentic Mexican piñata, you will... 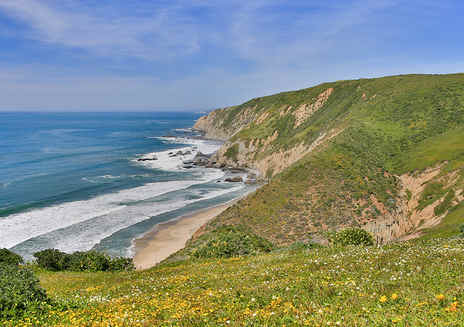 Jutting dramatically out into the Pacific, the West Coast’s only national seashore extends across 70,000 acres of a large triangular peninsula that appears to have broken...