The women will kick it off on Thursday, May 11, with a 72.7-mile route around South Lake Tahoe. This is the second year the women’s race is part of the UCI WorldTour, the highest level of racing in the world. “For us to receive this high honor is amazing from a competition side,” Klein says. “These are the best riders in the world—both men and women.”

During Stage 1, the women will ride clockwise around Lake Tahoe, passing through Emerald Bay and Tahoe City before finishing with a tough ascent up to Heavenly Mountain Resort.

Klein describes the women’s Stage 2 as a “very, very difficult stage” that starts where it finished the day before at Heavenly. The challenging 67.1-mile route features one of the hardest climbs in the entire race—including the men’s. The monster Kinsbury Grade climb, known as “The Grade,” ascends 2,700 feet over eight miles. The Grade is the second QOM of the day (that is Queen of the Mountain, a segmented section that counts toward earning the coveted polka-dotted jersey)—the final one is the push back up to Heavenly.

For the opening stage, head to the first climb in Emerald Bay on Highway 89. “Many people consider this to be the best vantage point,” Klein says, “and you’ll have time to get back to Heavenly for the finish.” Expect a select group to fight their way to the finish, where a steep climb back up to Heavenly will separate the pack.

On day two, watch the race start and head to the Kinsbury Grade. “This is one of the most difficult climbs in the women’s or men’s stage,” she says. “It’s really, really unique and significant.”

Sample the limited-release local beers with a wood-fired burger at Tahoe Brewing in Tahoe City. Sit on the patio for views of the lake, and step outside to watch the race roll by as it continues north. If you stick around South Lake Tahoe, take a ride in Heavenly Mountain’s year-round gondola—the panoramic views of the lake will not disappoint. Or for a unique viewpoint, hop aboard a paddleboard or kayak and watch riders from the crystal-blue waters of Lake Tahoe. 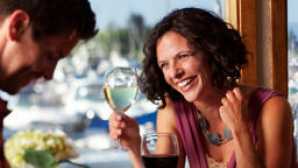 South Lake Tahoe – Where to Eat 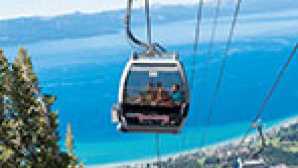 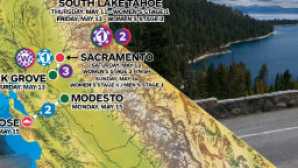