Between the falling flakes and the après-ski party atmosphere, a holiday in the California snow is festive from the get-go. Around the Golden State ski resorts also throw parties all season long for any number of reasons: the holidays, music festivals, world-class competitions—even skidding across a slushy pond as winter turns to spring. Here are 14 events at California ski resorts—from the Sierra Nevadas down to the San Bernardino mountains—with parties that make a great excuse to plan a California ski trip.

Celebrate the holiday season and the starry nights of the winter solstice by skiing or snowboarding each evening from 3–8:30 p.m. at the Southern California resort’s Upper Miracle Mile, Summit Run, and Westridge Park. (There are more night sessions during Snow Summit’s season, but this is the longest stretch of them.) Westridge even gets a full evening groom during Night Sessions—a gift if you’ve never hit the fresh snow at dawn.

This three-day annual music fest at Lake Tahoe Community College—with an emphasis on electronic dance music—boasts of being the biggest New Year’s Eve party in the Golden State. Headliners this year include Dillon Francis, Travis Scott, and Zedd. At nearby Heavenly Mountain Resort, ring in the new year with a live band, fireworks, and a midnight “ball drop” along the brightly lit gondola.

Other Tahoe-area resorts throw their own NYE parties too. At Squaw Valley Alpine Meadows, NYE lasts all day long, starting with Dawn Patrol with Jonny Moseley and ending with a family-friendly celebration with fireworks and a glow stick parade. The Northstar Village party offers ice-skating, s’mores-roasting, and fireworks at 9 p.m. Kirkwood, meanwhile, holds its annual Torchlight Parade, with a big fireworks show at the base of the mountain.

During January, this family-friendly resort in the San Gabriel Mountains—90 minutes from Los Angeles or Orange County—welcomes beginners with discounted lessons for its Learn to Ski & Snowboard Month. The resort even has a virtual ski lesson area where you can master the basics indoors. Highlights of the month include Bring a Friend Weekend (Jan. 5–7), World Snow Day (Jan. 21), and the all-important Learn to Turn Tuesdays.

Extend your family’s Presidents’ Day weekend into a full week at Squaw, which makes the most of the “ski week” that many kids get off from school. Little kids will freak, for instance, over the Big Truck Event that showcases snowplows, grooming machines, and fire trucks. The week also features kid-friendly street parties, concerts, and an all-kid game and craft room. It’s a great time, too, to enjoy the resort’s aerial tram rides, snow tubing, ice-skating, and mini-snowmobiles, which kids age 6–12 can drive on the groomed oval at the resort’s SnoVentures Activity Zone.

This annual festival in the Lake Tahoe area includes live music and festivities—from polar swims to fireworks—at Squaw Valley Alpine Meadows, Homewood, and Northstar. Annual highlights include the crowning of the SnowFest! Queen and a fabulous pet costume contest.

This annual event celebrating diversity in snow sports comes to Lake Tahoe this year, and is considered one of the biggest ski conventions in the U.S. The organisation was founded in 1974 to support winter athletes of colour, and the yearly festivities include live music, races, and different après-ski themes.

See tomorrow’s stars in action at this five-day event at Unbound's Main Park and 22-foot half-pipe. Amateur junior athletes (ages 13–19) will compete for the chance to be a part of the U.S. Grand Prix, Junior Worlds, the U.S. Open, and USASA Nationals.

Spring Break at Bear Mountain has a freewheeling, SoCal-style flavour: tube racing, obstacle courses, a pond skim, and “big-kid” activities like cornhole, giant beer pong, and ladder golf. The week is also bookended by concerts, like past headliners Cypress Hill.

Snow, sunshine, and good music combine for this pretty irresistible spring festival. Come for three days of world-class bluegrass and acoustic roots music on three stages, complemented by craft brew tastings at the Beer Hall. Past headliners have included the Greensky Bluegrass, Leftover Salmon, and the Travelin’ McCourys. Kids are welcome too: age 12 and under get in free and can participate in kids’ zones with their own music, crafts, and hula-hooping.

The national park’s winter-sports area celebrates the coming thaw with live music and a range of activities like a costume contest, an obstacle course race, and a freestyle competition for older skiers. Don’t miss the World Cup Dummy Race, in which participants create “dummies” (at least one metre high and under 45 kilograms) and then set them off in a race down Red Fox Run.

Spring It On Pond Skim

While the warmer temperatures of spring might put a damper on some winter sports, the thawing bodies of water at ski resorts create new opportunities for daredevils, show-offs, or fun-loving masochists. This classic “pond skim” on the north side of Lake Tahoe is free to anyone who wants to try crossing chilly water on skis or snowboards, while also rocking an appropriately weird costume. (One catch: Only the first 75 people who arrive can compete.) Watch the messy fun from the bottom of the neighbouring half-pipe, or enjoy the live music at the Gondola Deck, then check out the big Tug-o-War contest afterward.

The folks at Squaw Valley boast that, back in 1989, they launched the first “pond skim,” in which participants traversed icy-cold Cushing Pond on any contraption based on skis or snowboards. Today, the same festivities are overseen by a celebrity panel of judges who score the participants on both their skills and moxie, and the results are fabulous, even when they’re a little sloppy.

This beloved annual event at Alpine Meadows offers another creative spin to the wacky spring skiing season. Tee up on the unique nine-hole golf course that will span the mountain, beginning at the Summit Express Chair and ending at the bottom of Alpine Bowl Chair. Give your usual snow outfit a layer of Caddyshack-inspired colour: Whether you manage to birdie or bogie your way through the snow, you can enter the costume contest at the end.

The Kamikaze bike trail extends down the backside of Mammoth Mountain, from the peak to the Main Lodge. Spell “kamikaze” backwards—and travel the trail backwards too—and you get the Winter Ezakimak race, which invites participants to use snowshoes, cross-country skis, fat bikes, or even just go by foot and do a 5K up the mountain. Spectators, meanwhile, can just ride the gondola to the top for the music, family-friendly activities, and beer or hot cocoa. 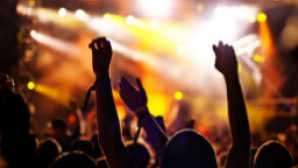 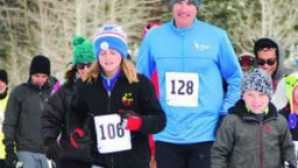 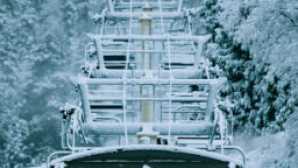 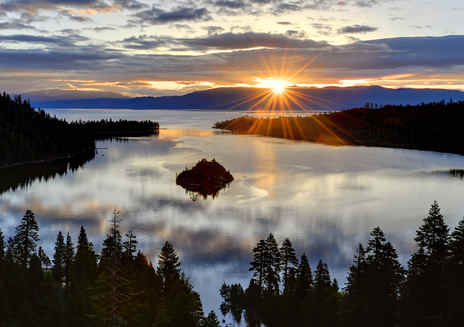 Look down on this astounding bay and you can see why Mark Twain dubbed Lake Tahoe "the fairest picture the whole earth affords." While the main lake is as blue as a topaz... 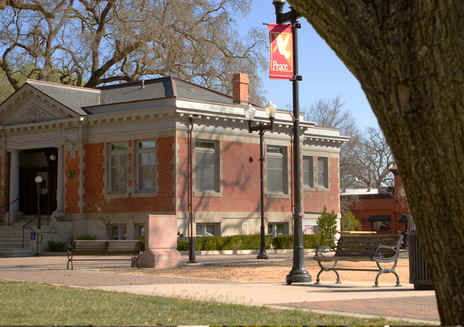